The Dominion Covenant: The Everlasting and Unchangeable Commission

And God blessed them, and God said unto them, Be fruitful, and multiply, and replenish the earth, and subdue it: and have dominion over the fish of the sea, and over the fowl of the air, and over every living thing that moveth upon the earth. Gen 1:28 AV

When God commissioned Adam to till and take dominion over the earth and all its creatures, He was issuing an everlasting cultural mandate. Whenever the Eternal Lawgiver speaks, His word becomes eternally unchangeable. Therefore, Adam's call to dominion continued after his rebellion in the Garden of Eden. Regardless of the fall, the dominion mandate remained in effect. In fact, since all flesh was in the lions of Adam, the elect included, the commission to till and take dominion is still in force today.

If ever there was a practical doctrine of the Holy Scriptures that has been overlooked by the modern church it is the doctrine of the  "Cultural Mandate" of Genesis 1:28. 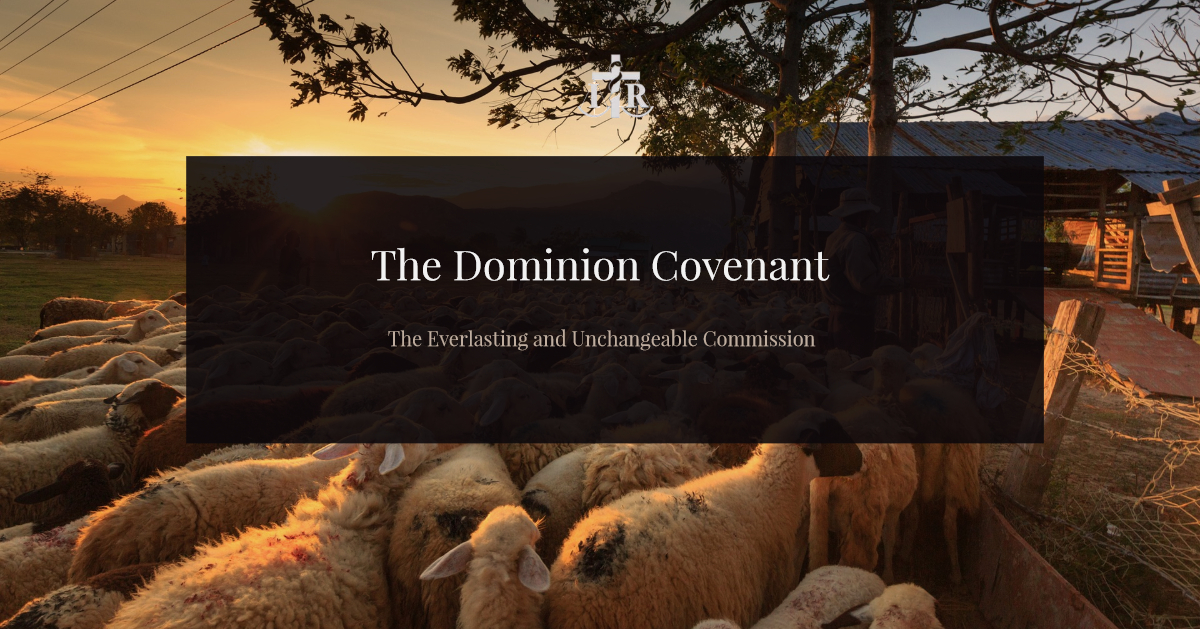 The church has regressed into an arena of blatant ignorance concerning their place in society. Like the Reformationalist monk, Martin Luther, the church embraces the ideology that Christ and the Gospel has nothing to do with the natural life. Luther's view was that the Scriptures, focused only upon the soul and spirit, and omitted the things of the world. While Luther's contribution to reformation Theology cannot go unnoticed, in Luther's view, business, politics, government, science, law, the arts and literature was not to be brought under the authority of the Scriptures. These disciplines, Luther believed, were outside of the interest of the Holy Spirit. With all Christian respect to Luther for his faithful devotion to Christ and the Gospel, on this point he was very wrong.

The modern church has also embraced the "escapism" mentality claiming that the saints are to abandon the world since they are not called to "polish brass on a sinking ship." What they have succumbed to is the notion that there is exists dualistic existence; one of the natural and the other of the spiritual. The natural is cursed and destined for the wrath of God, while the spiritual is blessed, destined for the glory of heaven.

What the modern religionist believes is that there is a secular world and a sacred world - the natural and the spiritual. These are distinct and are not to be confused or interwoven. The Christian, they believe, is only to be interested in the sacred, denying entirely the secular. It is in this way he makes the distinction, and hopes to remain unspotted by the world. Yet, this is not a distinction made by the Scriptures.

The European Reformation of the 16th Century was special because it restored the original Biblical Idea of Cultural Dominion over every sphere of life. The word "secular" means "pertaining to this present world." It is translated as "non-sacred" or "not holy". It also is understood as meaning "not bound by any religious laws, oaths or commands". To be secular therefore, would yield itself to being anarchistic, not being bound by any Divine Law. Again this notion flies in the face of Holy Scripture.

Yet, everything is bound by Divine Law. All mankind is held completely accountable to the Law of God, naturally and spiritually. God remains Sovereign in all legislation, whether it is the Laws of Nature or the Laws of Heaven. God is the God of nature as much as He is the God of Heaven. He is the God of the seen as well as the unseen, and His Laws are structured to be obeyed. This fundamental and essential fact is what the modern church has forsaken to its own hurt.

The Cultural mandate, renewed by the European Reformation rightly understood that Adam's commission to "till" the ground was a commission to "cultivate the earth". Societal cultivation is the focus of the Gospel.

The New Birth and the Restoration of the Society

The New Birth is only a portion of the Gospel program. It stands alongside the restoration and reorganization of the culture. It is the essential tool to bring about the reconstruction of the culture in the age of Anno Domino, the New Testament Dominion period of the New Covenant.

The regeneration miracle of the soul is the regeneration of the whole man. Upon the New Birth the elect saints become the army of Christ, dispatched into the realm of the "secular sin cursed world" in an effort to its restoration. As John states by the Holy Ghost, "For God so loved the World...", indicating that God loves His created Cosmos. This cosmos is the natural world which was destroyed by Adam's disobedience. Christ came both to restore His people and His World to Himself. Biblically, there is no distinction between secular and sacred - everything of God's creation is sacred.

This means that as a result of the regeneration of the whole man, the restoration of every sphere of life, in which man lives, must be undertaken. Thus the cultural mandate. This "sphere sovereignty" is what every true Christian labors to achieve. Wisdom compels the saint to bring every aspect of his world under the righteous authority of Christ and His Law. Not only must the Christian's own mind and will be subdued, but every high arrogance of the entire rebellious human race as well.

Casting down imaginations, and every high thing that exalteth itself against the knowledge of God, and bringing into captivity every thought to the obedience of Christ;

While some would argue that the eschatology of the Christian has little bearing upon "essential" life practices, nothing could be farther from the truth. Eschatology, i.e. the study of the last things, has everything to do with how one lives. The modern church has adopted a "pan-millennial "view of the last things, which by definition means, that everything will "pan out" in the end. In other words, the plan of God for the culmination of history isn't very  important.

To their own ruin, the modern church has adopted the popular rapture fever philosophy, which states that Christ can rapture the church at any moment since the end is at hand. This doctrine also favors the notion that most of the New Testament prophesies, particularly those in Revelation, are future events.

Since these conclusions are based upon faulty exegesis and faulty preconceptions, the church lies shipwrecked upon its own idea of eschatology. The problem with the futurist view is not only that it has concluded erroneously, concerning the last times, but the means by which those conclusions are reached exhibit a gross misunderstanding of basis hermeneutics. The futurists have not allowed God to define His own Word. They have defined it, or rather re-defined it, according to their own idea of how things should turn out.

The book of Revelation is primarily a re-capping of past events most of which is written in allegorical language, but which can be traced back to many Old Covenant passages.1 It has very little to do with the future. As a matter of fact, Revelation 19:10 defines the spirit of prophesy. It is the testimony of Jesus Christ revealed in the New Testament age, and not the testimony of future events. Christ is the fulfillment of the Prophesy of God. While He was the future event to Old testament prophets, He is also the fulfillment of that event to the New Testament saints. This is called the Preterist view of Scripture.

Futurists, and those with rapture fever, see the end at hand. This view provides an escape route of non-responsibility toward the society as a whole. Yet, the end of the age initially was a term used to identify the end of the Old Testament age. This is what Christ was primarily referring to in Matthew 24, Luke 21, and Mark 13.

On the other hand the end times, or the end and final age, is that time-period of the New Testament era. There will be no other age after this age. Therefore, God refers to it as the final or the end age. This period is the period of dominion and Kingdom building which can, and must be fully accomplished as a result of the Victory of the Cross.

To teach that there is yet another age yet to come denies the clear teaching of Scripture. Thus, the error of the Pre-millenialists, who teach that Christ will return to earth to set up an earthly Kingdom apart from the final Judgment. What they fail to see is that He has already set up an earthly Kingdom in His saints to bring about a Golden age of subjection of all peoples.

Christ reigns from Jerusalem now! It is simply the New Jerusalem, or the New Testament Jerusalem which are the saints of God. So then Revelation 21, when compared to Hebrews 12, must be seen as past events.

And I John saw the holy city, New Jerusalem, coming down from God out of heaven, prepared as a bride adorned for her husband. v2

The New Jerusalem which John saw is the New Testament Church. It is adorned beautifully and married to Christ now! It is one with Him now! The consummation is now! There is not to be a marriage supper in the future for the saints, it is a supper of marriage at His resurrected Victory - a past realization.

Furthermore, the resurrection Victory also ushered in the New Age of the New heaven and New earth. All things were made new by the restoration work of the Lord. That includes the new relationship which mankind has with God and which His creation has with Him also. This New heaven and New earth will continue after judgment day, but like the resurrected soul it begins in time and history, after the cross, in the age of His Dominion.

The futurists want an easy fix. If they can manufacture a doctrine that removes them from all cultural responsibility, they have little confrontational work to do. Oh , maybe convert some people here and there, but at least they do not need to confront governments, and school systems, and economic perversion, and so on. If the restoration of the earth is a time to come, in the "by and by", they need not worry about the work involved in bringing it to pass.

Since the mantra of the day is God's Rapture and not God's Sovereignty, those who are called to dominion need to go it alone amidst great "Christian opposition" as well as Humanistic opposition. May God help us in our quest to fulfill His will on earth, as it is in Heaven.

1 A careful look at the language of Revelation 13 concerning the beast coming out of the sea and the second beast likened to a lamb should immediately drive the scholar to the language of Daniel and Ezekiel. It is primarily in Ezekiel where God uses the same animal and beast-like descriptions to pattern Himself after and not some monstrous adversarial creature.

Compare this with the fire which the second beast in Revelation 13uses in judgment and it should drive the scholar to the two witnesses in Revelation 11, James and John the sons of thunder and the fire which Elijah brought down to consume the enemies of God. Future clues are gleaned as to the identity of the second beast when the scholar realizes that the fire of destruction is the Lord's power alone as it is also given to the saints. What most self proclaimed Bible teachers have taught concern these passages are simply not well studied out - at least not by using the Bible.