Without a doubt, there exists a crisis in human leadership. True, honest, Christ-entered leadership is at an all time low. While many professors of religion claim to be leaders of the people God-ward, they are often found to be self-seeking liars. These are not leaders, but ravenous wolves - blind leaders of the blind. While they may be charismatic, and profoundly influential, they are not leaders in the truest Biblical sense. What passes for leadership today is not leadership at all, but rather a series of influential actions which have a form of leadership qualities void of the integrity of wisdom.

When Godly leadership is evidenced, however, it is usually found in small, sometimes even obscure segments of the social order. These God fearing leaders are not readily embraced by the common people, therefore they remain hidden. Whenever the wicked rule, often as a result of an ignorant and arrogant culture, those who are righteous, and most capable of productive leadership, are hidden. A society which is kept captive to ignorance, will find themselves inundated with Godless leadership. Ignorance gives way to the flourishing of despotism.

The Christo-centric leadership crisis is both universal and comprehensive. It is also highly indiscriminant. Leadership maladies exist in every area of modern life. It has no favorites nor exclusions. It infects all spheres of life. 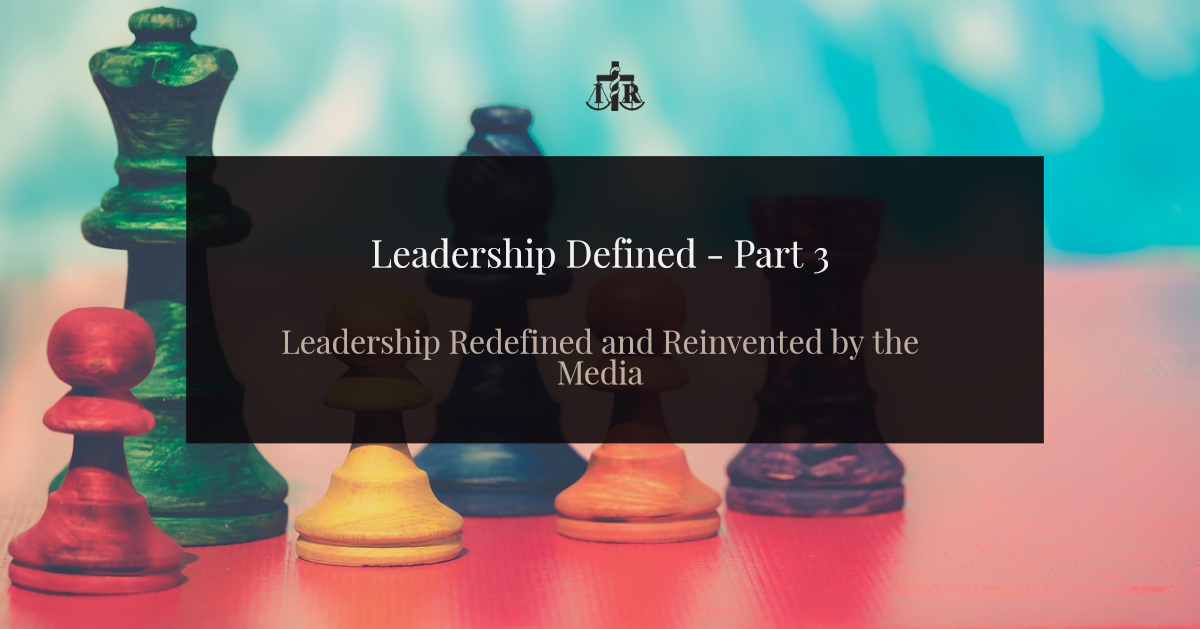 Leadership Redefined and Reinvented by the Media

One powerful tool used by the godless is the media. Vehicles such as movies, television, music, sports, and journalism have been on the cutting edge of the disintegration of the true leadership meaning. Godless, secular leadership models are being established, and reinforced, through the media like never before in history.

It has been rightly asserted that if people hear the same thing again and again, over an extended period of time, they will accept it as fact. Even in the community of Bible believing Christians, "group think" mentality is prevalent. This truth is multiplied exponentially in our modern day.

The liberal humanistic agenda has been both defined and established through the use of the mass media. Only recently, as a response to this onslaught, has there been a wave of Biblical and Conservative based information available through radio talk programs, TV journalism and the Internet. If true leadership is to be reasserted it will be done so through the use of these technological venues.

In light of the onslaught of liberal, and anti-Christian propaganda permeating our culture, the Christian Home must be insolated from these lies. Whether you are a single man or woman living alone, a married couple without children, grandparents or have a large family, proper, Christ-centered information must permeate your intellect. The atmosphere of your entire household must be carefully monitored.

In order to develop a clear and usable Biblical World view, one must be exposed to information and logic which is based upon a Biblical World view. The liberal media does not provide this - it will not provide this - it cannot provide this. This is why the Covenant Home needs to eradicate all promiscuous media influences from their environment. Counsel and ideology from any ungodly source must be shunned at all costs. While this is true, and needs to be practiced, this does not suggest that there can be no knowledge or needful information gained from secular sources. Facts and figures can be gleaned from a variety of sources provided they are accurate. Biblical counsel, on the other hand, can only be gleaned from the Word of God. Advise upon ethical actions, and/or Biblical decision-making cannot be gained, nor should it be sought, from any secular source whatsoever. The basic world view of all secular humanists is antagonistic against Christ and is of no profit. All things must be decided upon, and viewed from, the foundation of Theonomy - i.e. God's Law.

Clean up the atmosphere

The media influence of TV and music should never be underestimated. Introduce into your home environmental influences that exemplified doctrinal integrity and Biblical truths. If you have a habit of allowing your children to view television without being monitored, you have set yourself up for a series of terrible consequences. Instead, use the VCR or DVD player to regulate and control what your children watch. Even then, be careful, there are many ideas and liberal doctrines which categorically undermine the Christian faith. Beware.

Do not be lulled into a false sense of security by the fact that a movie is rated G, or that is an animated cartoon. Many G movies, and cartoons, are especially directed toward the re-indoctrination of the child into embracing godless ideas. Remember the rating commission is packed with secularists who do not use the Biblical standard. Watch the carefully selected video with your child. Know what is being shown, and spoken of. Discuss these with the children and turn the attempt to re-indoctrinate them into a lesson in debate and critical thinking in defense of the Christian faith. Use your video player into an educational tool for Biblical dominion. Build a video library which is wholesome and useful. Train and teach your child to spot the wicked and to be able to defend against it in argument and debate. The duty of the parent is to protect and train the child. Unsupervised media influence is a breach of Covenantal duty.

The movie industry can be a good tool for adults to use in establishing a strategy for Biblical argument. Whatever the movie industry is promoting on film, you can be sure the liberal anti-Christian humanists are promoting in Congress and amidst society. A skilled Christian apologist can sometimes use the movie industry to identify the direction of the enemy.  They always telegraph their next move. Movies are a social indicator. Those proficient in Biblical thinking can often frustrate anti-Christian agendas before they take root by understanding the thematic direction of Hollywood movies, television shows, music, art and literature.

Equipping the Covenant child with both direction and tools is essential. Every child needs direction. The child also needs tools which will enable him or her to profitably advance in the direction that Providence dictates. Whatever interests the parents usually, at least at first, interests the child. The child is molded after the parent, either directly or indirectly - actively or passively. Do not allow your child to be molded by accident. Be involved!  Make no mistake - everything the parent does influences the child. Be careful as to what direction your child is pointed.

Too often, parents do not have a Biblical Vision for their child. How many times have we seen fathers purchase, for their newborn sons, a baseball, bat and glove?  Or cars and trucks? Why not books? Why not teach the child to read early so that he may be able to think productively, logically and creatively?

How many parents expose their children to the various disciplines of life? - the arts, sciences, horticulture, agriculture, husbandry, industry, literature, music, logic, etc. Today's modernized parent exposes the child to a barrage of Nintendo games, filled with images of violence, perversion, sexually explicit icons, death and mayhem. The American mind is either typically stagnated or over-stimulated with negative experiences. If it is not sporting events, Nintendo, rock concerts, NASCAR, or the latest movie craze, the American people would be utterly bored with life. It is no wonder why Las Vegas is the second most traveled location in the World, second only to Mecca.

The Covenant home must be established upon God's Word and in God's Created World. They cannot allow themselves to take their direction from the worldly concerns and fads of the ungodly. To do this is to deny both God and His Word's commission for the saints to have Cultural Dominion. Furthermore, a worldly practice will always lead to a worldly family. This, by definition, is idolatry. It is the epitome of Covenant breaking. If leadership is to be True, it must be Biblical. In order for it to be Biblical, it must use the Standard of God's Word alone - then it will be blessed. There is no other way.

This is part three in a three part series on leadership defined.