The Dominion Covenant: The Importance and Intent of God's Law

The Dominion Covenant: The Importance and Intent of God's Law

The crisis facing Christianity today is largely due to the modernized Christian movement known as Anti-nomianism. While this destructive heresy is as old as the first century Church, it is as much a problem now as it was then. Antinomianism is a theological word derived from two Greek words, anti and nomos, against and law. Antinomianism is the doctrine of anti-law.

Modernized Evangelical Christianity has both failed to accept the absolute standard of God's Will, and also to properly understand and apply God's Law to everyday life as a result of this destructive teaching. Consequently God's Law is reduced to an antiquated system of "dos and don'ts" which is snubbed by many Christians as legalistic and unnecessary for the New Testament Church.

Biblical phrases such as "we are not under the Law, but under Grace" have been used perversely to justify a system of behavior void of faithful obedience to the Biblical Standard of God's Law. Christian obedience is reduced to a vacillating standard based upon emotional feelings, and not upon God's perfect Law-order.

Furthermore, modernized Christianity has also compartmentalized the Christian life to include only the personal and the ecclesiastic, shunning any responsibly to the social order of the culture. A individualized standard of ethics based upon the antinomianism mindset is not a Biblical approach to True Christianity. When every man does what is right in his own eyes, apostasy and judgment results. 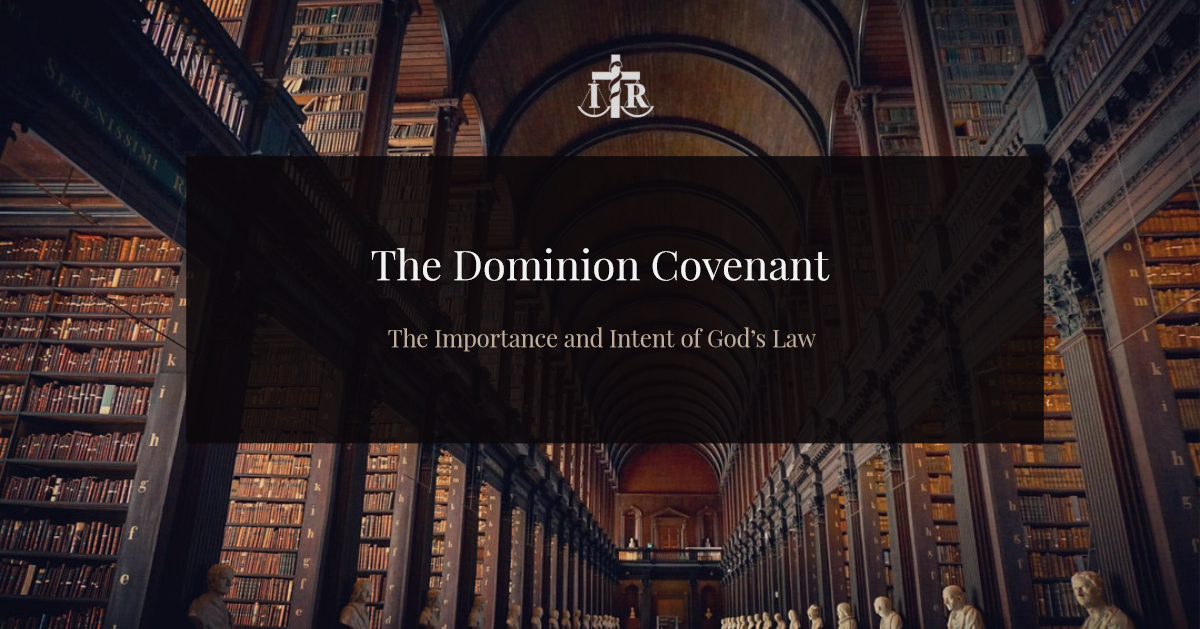 The Law of God is the Perfect Standard of Behavior

The Law of God is the basis for all acceptable behavior. The only part of the Law which the believer is exempt from is its condemnation not its standard. The regenerated soul is not under the "condemnation" of the Law, but under the forgiveness of Grace. As Greg Bahnsen states it in his "Theonomy in Christian Ethics,"

"The redemptive work of Christ did not end the function of the Law but rather established man in obedience to the Law. We are redeemed [so that] the righteousness of the Law might be fulfilled in us."

If God's Law is separated from God's Grace, then Grace also disappears. The two are uniquely inseparable. What God hath joined together, let no man put asunder.

The Apostle Paul makes it clear that the Law should not be made void through faith but rather established through faith. cf Rom 3:31  The Commandments of God are the perfect tools for Biblical Conquest and Dominion.

"Where there is no vision the people perish: but he that keepeth the Law, happy is he." Proverbs 29:18

The alternative is based upon two choices, Theonomy or autonomy. It is either God's Law or man's law which by definition is anti-law.

In The Beginning Was The LAW-WORD

Genesis 1 establishes the Sovereign position of God as the Legislator King. Since God is the Creator, and owner, of the entire universe, He is also the legitimate Lawgiver. His perfect Law is the Divine expression of His will, nature and being. It sets forth the divine order of the universe in a framework of justice and righteousness. To reject God's Law is to reject God.

All creation was made to be in obedient subjection to the Will of the Creator. Adam's Covenant with God was both a Covenant of Grace, and a Covenant of Law. Both Grace and Law are Covenantal Blessings. Adam's relationship with God was not a Covenant of "works", as if to imply that Adam needed to "work" for God's Grace, but rather it was a Covenant of Obedient Action in dominion and subjugation of his environment. Adam's work in the garden was a response to the Grace of God.

The modern understanding of God's Law is not accurate. God's Law is more than a legal code of moral righteousness. It is a Covenantal mandate which establishes the parameters for a proper relationship between God and man. Re-created man, born again after the image of the Last Adam, Christ, is obliged to obedience according to the Law's moral standard. Regenerated man must live by every word which proceeds forth from the mouth of God. Lawful obedience to God's Word is a result of God's regenerating Grace, not a condition for Grace. Therefore, the only acceptable behavior of the Christian is lawful obedience, which is structure according to His reveled Will. Lawbreaking is the blatant refusal to live within the relationship established by the Covenant of God.

God's Law Is Not Restrictive

If the Law of God is viewed in the negative, it is then seen as a code of restrictions. Thou shalt not seems to predominate the life of obedience. This un-Biblical perspective on the Law renders the Christian powerless and oppressed. Yet, the Law is actually an empowering tool and a liberating tool, rather than a restrictive set of ordinances. A misunderstanding and misuse of God's Law always causes bondage, weakness and spiritual poverty.

The apostle testifies that those who are born of Grace do not view God's Commandments as grievous. cf 1 Jn 5:3

Paul declares that the weapons of our warfare are not carnal but mighty through God to the pulling down of strongholds and every high thing that exalts itself above God and His majesty. Those weapons are God's precepts and commandments. As Paul, by the Spirit, also declares, the Law-Word of God is the Sword of the Spirit. It is the Law which is mighty through God and which is spiritual in power and efficacy. What the modern Christian's must understand is that God's Law is not a legalistic doctrine but a rule book of instructions for daily living. The Law is given so that men may walk prosperously and productively as kings upon the earth, treading down the wicked of the world.

Another misconception of the modern pseudo-Christian - antinomian movement is that the Law is not personal. In other words, it concerns everyone outside of the regeneration Covenant, but exempts all within the regeneration power of Grace. Nothing could be farther from the truth. Both Grace and Law are personal since they both are given by a personal God to people in particular.

The Extent of the Law

The Law is exhaustive and comprehensive as it is universal. It includes every and all areas of life. God has something to say about everything, and His Law is given to bring Divine order to a Divine Created Universe.

Since God has created all things, including all institutions, He reserves the right to legislate over all things. His rule, and legislative authority, is Total. This was a common understanding and practice of the early church. At one time, Christianity recognized God's Law as the governing standard for both men and nations. Peasants, priests and kings were bound to God's commandments. Today the revolt against the authoritative standard of God's Law is resisted and often abandoned.

There is a revolt underway to undermine the Law's authority both in the secular community as well as the Christian community. No longer is the Law seen as a blessing from God. Cf Deut 10:13. It is now shunned as a restrictive yoke.

Those Who Practice Lawlessness

Unlike David, son of Jesse, who loved the Law of God, only those who are false apostles hate God's Law. These wondering souls spew forth the idea that God's Law is an Old Testament notion, only to be disregarded in the New Testament dispensation. Yet, the Lord Christ condemns the false Christian in Matthew 7:23 for this exact doctrine, declaring them workers of iniquity, i.e. "lawlessness". (Gr. 458 lit. lawless, transgressor, [root 459] without law, destitute of the Mosaic Law)

Why Do Men Hate the Law?

Men hate the Law because it condemns them of their sins. The Law is an offense to those who want freedom to sin rather than freedom from sin. It also shows them that there is a standard of Truth higher than their own. Remember, sinful men wish to be god-like. Their philosophies take on a Messianic flavor. Yet, without the Word as the source of Truth, righteous law and public policy, cannot be achieved. Autonomy is a sin against God and traces back to the sin of Adam in Eden.

The solution lies in simple obedience. Legitimate Law-keeping is done from the position of regenerating Grace and not from the desire to merit regenerating grace. By the deeds of the Law there shall no flesh be justified in His sight...cf Rom 3:20

Through the proper application of God's Law to each and every area of life, the saint can begin to overturn the antinomian poisoning of the culture. The Lawful intent and purpose of God's Law needs to be re-examined and re-embraced. Like Josiah of Judah, the Law must be read and followed unto full repentance so that restoration may take place. This must be accomplished on a personal, familial, ecclesiastic and national level. Every area of the culture must be infiltrated in order to bring the full weight of the Law's truth upon it. No discipline should be avoided. Each should be confronted and restructured according to the absolute Truth of God's Holy Standard.

The True Christian must be of Grace and of Law. His work must be executed upon the earth according to the perfect system of moral righteousness as a result of the Work of God's intervening power of regeneration. To reject God's Law is to reject God's Grace.

Further reading: The Grace of Law: A Study in Puritan Theology  and The Moral Law by Ernest Kevan

This is part three in a five part series on the dominion covenant.