Many well meaning, Bible believing Christians hold to the belief that the principles of these Political Parties are in direct accordance with the principles of Christ, when it comes to morality, liberty, law and public policy. Yet is this really true? 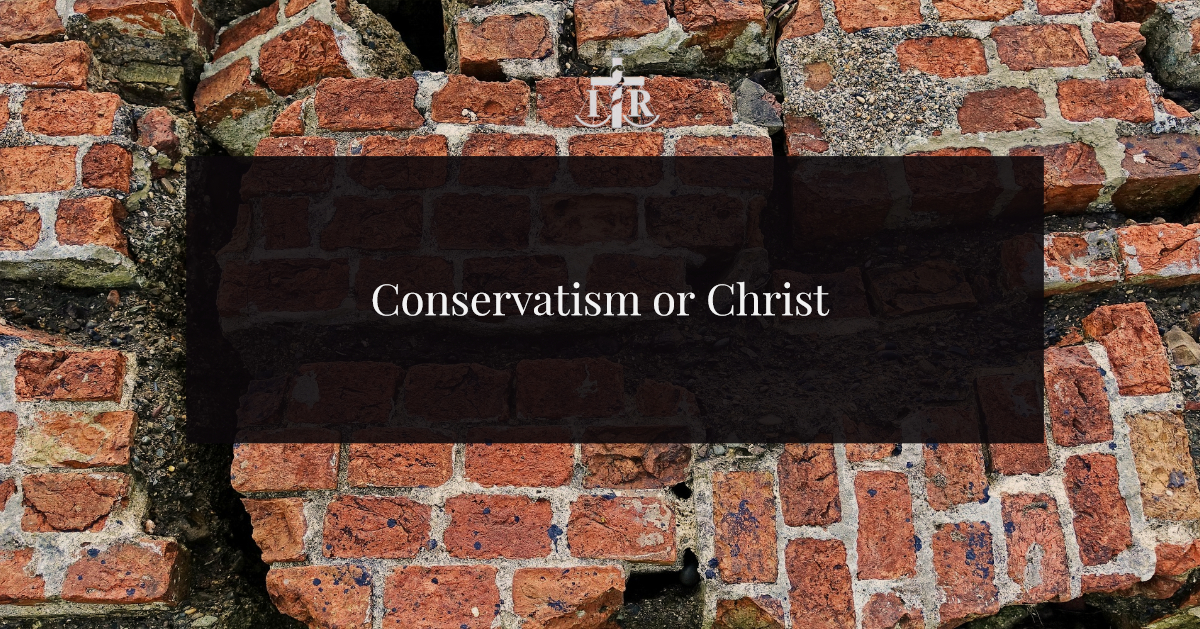 What is the nature of today’s political Conservatism? Is it rooted in Biblical Law or in tradition? Does it hold to a fundamental Scriptural ideology or does it rely upon a certain humanistic perception of reality in order to formulate its position?

While the official platform of the Conservative Republican Party is a wonderful expression of family values, economic freedom, government limitation, and basic libertarian policy, in practice Conservatism falls far short of the true expression of Christ-centered principles. Since it was these basic Christo-centric precepts that formulated the nation, it should be these principles that maintain the nation. Conservatism should “conserve” those principles, not reinvent or reinterpret them.

But what is the root of modern Conservatism? Does it come from the Scriptures or from something else? According to political expert Paul Henry, “Political Conservatism is a tradition of political thought having its origins in reactions against the libertarianism and individualism of the French Revolution of 1789…”

This reaction was based upon human reason. As Edmund Burke declared, “Government is a matter of practical wisdom stemming from the historical experiences of a given people.”

Thus, Burke’s “wisdom” would be influenced arbitrarily by history, experience, and the passions of men rather than God’s Word. According to this “Enlightenment rationality” and evolutionary ideology, no people could be really secure since law and public policy was always subject to change. The Reverend William O. Einwechter rightly asserts that under this Enlightenment ideal, even liberty itself would be subject to incremental change depending upon the need which history would dictate.

Burke did not suggest that law and public policy would be applied to various changes of societal matters but that the law and policy itself would change depending upon experience and certain historical revelations. This dogma places every individual at risk to either totalitarianism or anarchy.

Burke’s conservatism ideal declared that change must take place according to changing traditions and the “self conscience” practices of a given people. Therefore, according to Burke, conservatism conserves nothing, but rather makes way for any and every kind of change, depending on the whim of the people and their elected official.

According to Russell Kirk, Conservatism never was intended to be a fixed and immutable body of dogmas but rather its essence is the “preservation of the ancient moral traditions of humanity.” For Kirk, the essence of Conservatism is to re-express ancient tradition, thus allowing for change within a set, yet somewhat flexible, perimeter of tradition.

Rather than structuring the societal order according to the set standard of Divine Wisdom found exclusively in God’s Law, the Conservative structures societal order based upon a universal morality and transcendental order of “natural law”. This natural law, while having a form of Divine basis, actually is determined by man’s tradition and past history. Thus modern Conservatism has no standard but the standard of historical, evolutionary and incremental change. This is why it is destined to failure unless the unchangeable standard of Biblical Law is reintroduced as its fundamental policy. Again Einwechter sates it most clearly: “In conservative circles Christ and Biblical Law are out, while Locke, rationality and natural law are in.”

While there are fundamental differences between the Liberal socialist and the Republican Conservative, the lines are often blurred. The modern Conservative is as often as secular in his politics as his liberal counterpart. One need only to look back upon recent history to see that the “Conservative movement” has undoubtedly and progressively shifted toward the left while the Democratic socialist movement has progressively shifted to the far left.

It has been said repeatedly that while the Democrats seek to destroy this country by driving her off the cliff and into the depths of socialism and egalitarianism at 100mph, the Republicans seek to do the same, only at a slower rate. So what’s the difference?

Christian Politics is Christ centered not man centered. It is not conservatism, libertarianism, rationalism or Enlightenment thinking. It is Christian based thinking rooted in Biblical Law. While conservatism places man as king, Christian thought sets Christ as King of kings and Ruler of Nations. Christian thought is Biblically based where the Scriptures reign as the Supreme Standard of Law and Public Policy. Christian politics seeks to bring all men in subjection to His rule as ministers of good and the punishers of evil. Theologian and political analyst, John Fielding observes that today’s conservatives have taken Thomas Jefferson as the king in rejection of the True King of Kings. May we claim what Benjamin Rush declared; “I am neither a democrat nor an aristocrat. I am a Christocrat.”

About the author: The Rev. Dr. Paul Michael Raymond pastors the Reformed Bible Church In Central Virginia and is the Chief Director of the Institute for Theonomic Reformation, an online Christ-Centered Educational Resource Center. He can be reached at his website HisGlory.us.