Theonomy is a composite Greek word which simply means God's Law. [Theos = God & Nomos = Law]. While the word itself may have a simple meaning, its implications are not at all simple.

The Theonomic Creed holds to the doctrine that God's Law is Supreme, universal, and comprehensive, and that all flesh is bound to obey it. Theonomy insists that all human action, law and public policy be entirely, and comprehensively subject to the Divine Standard of the Holy Scriptures. In regard to moral Law and legislation, the question is not "law or no law" but rather who's law? To ask that question is to answer it. Mankind will either follow God's Law or a law of his own making. The issue is one of Theonomy or autonomy - God's Law or self-law.

While it is true that no son of Adam can perfectly keep the Holy Law of God, they are commissioned and commanded to totally keep it, in every area and aspect of life. This obligation is given to everyone without exception. All those who are created in the image of God are entirely held accountable and responsible to obey. The fact that by nature they will not, nor cannot obey does not exempt them from adhering to the Divine Commandments.

On the other hand, those who are regenerated by the Last Adam, the Lord Christ, are empowered by the Holy Spirit, so as to appropriately exercise the commission of obedience to the Law of God totally. Yet, even the Sons of God, cannot keep the Law perfectly. They do however, strive to keep it totally. 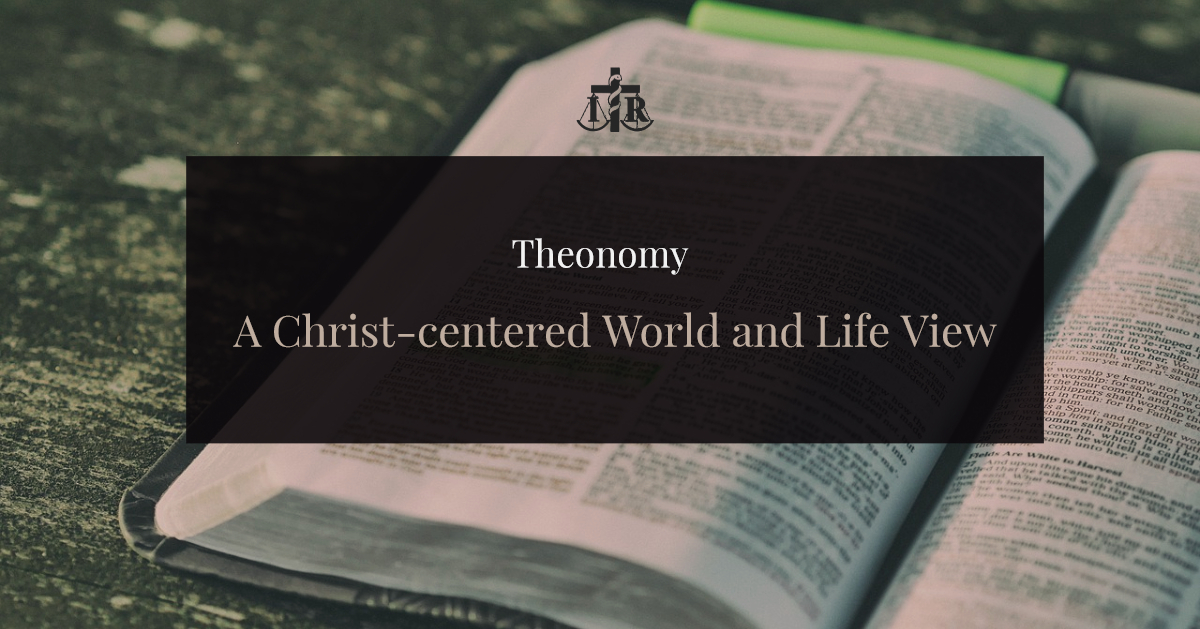 Every Christian a Theonomist

Many are they which profess to be Christian, yet, in reality are in stark rebellion against the Law of God. By perversely using Scripture, these claim liberty from the Law, sighting texts such as Romans 6:14.

Where the Apostle declares that the saints are free from the condemning power of the law's demands, antinomians read it as being free from obeying the Law's perfect standard of obedience. Consequently they become a law unto themselves, and practice a form of godliness without the power of God's Lawful standard. Antinomians cannot reconcile the words of the Psalmist with their erroneous doctrine.

Contrary to the lawless, the Theonomist does not find the moral, Judicial Law of God a burden. The Law to him is a delight and an empowering tool for personal and cultural dominion. Theonomists love the Law because they love the Lawgiver. They obey out of love and childlike faith.Antinomians do not love the Law, but rather seek to change the Law in order to fit their autonomous lusts.

The Theonomic approach to the Christian life is the only approach. "If ye love me, keep my commandments." No clearer principle can be set forth than this. Love and careful obedience are yoked together.

The Success of the Reformation based upon Theonomy

The reason behind the success of the 16th Century European Reformation can be directly traced back the principles of Theonomy. This is especially evident in the Scottish arena. John Knox is considered by many to be the most Biblically consistent and theologically thorough of all the great reformers. His posture on the Regulative Principle of Worship and Life sparked a great awakening and revival among the reformers which followed through to many generations.

Of all the reformers, Knox remains the most ardently loved and fiercely hated. No Reformational leader saw so clearly the need to apply the Law of God totally to every aspect of life - politically, socially, economically, ecclesiastically, familiarly (i.e. to the family), and personally, than Knox.

Knox, along with many of the other great Reformers of his day saw the Old Testament as a book of Case-Study Laws. These were actual, historical cases of legal precedence which were to be used as a source-book of law and policy. These laws also were to be binding upon all nations to the same extent as they were binding upon Israel and Judah. This binding power of God's Law was simply due to the fact that, like God Himself, so too were His Laws immutable and universal to all nations and peoples, regardless of geographical location or religious affiliation.

Although much of the Theonomic emphasis is upon the role of the Civil governing authorities, it is a complete doctrine which intervenes into all areas of life. Theonomic principles are the principles of Law and Ethics for the home and the family as much as it is the standard for the Government, not to mention the church and the individual.

Theonomy is not legalism - it is obedience. It is an obedience which has no boundaries, that is to say, obedience is to be practiced everyday in every area of life's realms without exception, and without delay.

The Institutes of Biblical Law I II III by R.J. Rushdoony

No Other Standard by Greg Bahnsen

By This Standard by Greg Bahnsen

The Grace of the Law by E. Kevan

Knox's Appellation to the Civil Magistrates by John Knox

The Reformation in Scotland By John Knox

The Sinai Strategy by Gary North

The Reconstruction of the Church by J. Jordan

Claims to Dominion by James Willson 1832